Lyrids meteor shower to peak TONIGHT: How to watch the shooting stars

AN artical from The Express By Sean Martin

The Lyrids Meteor Shower, caused by the falling debris from the comet C/1861 G1 Thatcher, occurs annually in mid-April as Earth travels through the trail of dust and tiny rocks left by the travelling comet. This year, the meteor shower will peak on April 21 to 23, giving stargazers in the UK a chance to step outside from their lockdown to view the phenomenon from their gardens.

Lyrids is described as one of the most significant meteor showers, with shooting stars expected to occur up to 20 times an hour.

The Lyrids meteors look like they are coming from the constellation Lyra, meaning Lyra is the radiant.

The shower starts only after the radiant rises in the sky so onlookers should check times to know when to head out to look to the heavens.

An astronomer’s handy tip to look for Lyra is to seek out Vega – the brightest star in the constellation.Lyrids meteor shower to peak TONIGHT: How to watch the shooting stars (Image: GETTY) 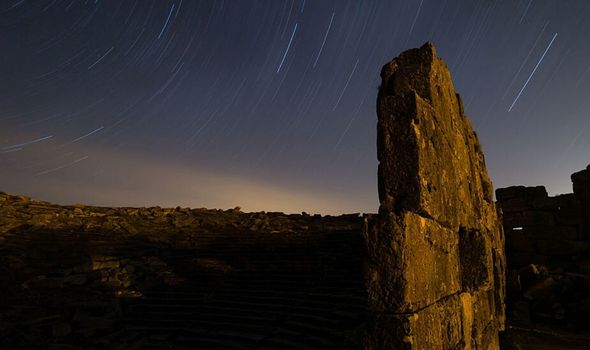 Lyrids is described as one of the most significant meteor shower (Image: GETTY)

The Royal Observatory Greenwich said: “The best time to see the shower is in the early morning of the peak day, which this year is the morning of the 22 April (the night of the 21 April).

“Wait until after midnight when the radiant point, in the constellation of Lyra, will have risen in the East.

“The later in the morning you wait, the higher the radiant will rise and the fewer meteors will be hidden below the horizon. But the closer you get to sunrise the brighter the sky is going to become so plan accordingly!

“Then simply fill your view with the sky and wait. Lying on the ground is a great way to see as much as possible – blanket optional but highly recommended. Reclining deckchairs make an even more comfortable way to view the sky.Up to 20 shooting stars could be seen tonight per hour (Image: GETTY)

Government announced on Monday 1st Feb that all adult residents in the EN10 area of Broxbourne are being encouraged to get a COVID-19 test over the next two weeks, whether they have symptoms or not

Hertford & Stortford Labour Party call on local MP to demand a halt to the export of riot-gear to America.

This website uses cookies to improve your experience while you navigate through the website. Out of these cookies, the cookies that are categorized as necessary are stored on your browser as they are essential for the working of basic functionalities of the website. We also use third-party cookies that help us analyze and understand how you use this website. These cookies will be stored in your browser only with your consent. You also have the option to opt-out of these cookies. But opting out of some of these cookies may have an effect on your browsing experience.
Necessary Always Enabled
Necessary cookies are absolutely essential for the website to function properly. This category only includes cookies that ensures basic functionalities and security features of the website. These cookies do not store any personal information.
Non-necessary
Any cookies that may not be particularly necessary for the website to function and is used specifically to collect user personal data via analytics, ads, other embedded contents are termed as non-necessary cookies. It is mandatory to procure user consent prior to running these cookies on your website.
SAVE & ACCEPT