A two-day music festival, headlined by 80s icon Adam Ant and rock band Echo & the Bunnymen, is coming to Little Hadham for the first time.

The team behind it is also responsible for ska, punk, mod and northern soul festival Stone Valley South, which is returning to East Hertfordshire for a third staging, with three days of music at Hillside Farm, Great Amwell, on August 13-15.

The new event, called Sign of the Times, will take place at Church End, Little Hadham, will feature bands and DJs across two stages on Friday and Saturday August 20-21.

On Friday, Echo & the Bunnymen will headline. Two of the Liverpool band’s original members – frontman and vocalist Ian McCulloch and guitarist Will Sergeant – will roll back the decades to their 80s heyday.

Formed in 1978, their 1980 debut album, Crocodiles, entered the top 20 of the UK albums chart and was followed over the next four years by Heaven Up Here, Porcupine and Ocean Rain, all of which reached the top 10.

They won an army of fans with singles including top 20 hits The Back of Love, The Cutter, Never Stop, The Killing Moon and Seven Seas.

The Wedding Present, the English indie rock group formed in 1985 in Leeds, and Celtic-folk punk band Ferocious Dog are also on the bill.

On Saturday, 66-year-old Stuart Leslie Goddard – aka Adam Ant – is the headliner.

The new wave ‘Dandy Highwayman’ was part of the 1970s punk vanguard and acted in Derek Jarman’s seminal film Jubilee in 1977.

After tangling with Sex Pistols manager Malcolm McLaren, who took the first incarnation of Adam’s Ants backing band to form Bow Wow Wow, he formed the five-piece which recorded chart-topping album Kings of the Wild Frontier in the summer of 1980, followed by Prince Charming (No 2 in 1981).

With the band and as a solo artist he chalked up 10 UK top ten hits from 1980 to 1983, including three No 1 singles: Stand and Deliver, Prince Charming and Goody Two Shoes.

He has also appeared in dozens of film and TV programmes. He will be joined in Little Hadham by legendary former Joy Division and New Order bass player Peter Hook and his band The Light, Liverpool indie rockers Cast, Shaun Ryder’s Black Grape, electro-pop and country fusion band Alabama 3, post-punk outfit The Futureheads and Bish Bash favourite Wilko Johnson, who played guitar with Dr Feelgood and the Blockheads and was the mute executioner Ser Ilyn Payne in TV’s Game of Thrones.

DJs set to appear at the festival include Trevor Nelson, Jazzie B, Norman Jay and Don Letts. The festival is offering day tickets and weekend passes for fans as well as camping and VIP packages.

The Sign of the Times team said: “We’re fans ourselves and want to see live music remain as accessible as possible to everyone.

“For our first year, Sign of the Times will bring you a diverse range of legends from rock, indie, blues, new wave, folk-punk and more, and classic DJs on a second stage that will be bouncing!”

For more details and to book tickets, see signofthetimesfestival.co.uk. 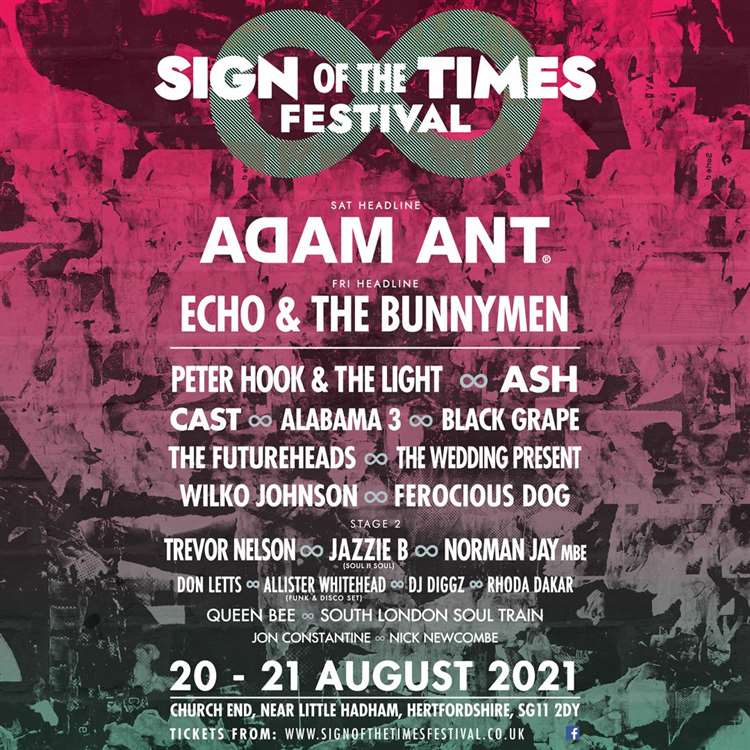 A NEW SKATEPARK FOR WARE

This website uses cookies to improve your experience while you navigate through the website. Out of these cookies, the cookies that are categorized as necessary are stored on your browser as they are essential for the working of basic functionalities of the website. We also use third-party cookies that help us analyze and understand how you use this website. These cookies will be stored in your browser only with your consent. You also have the option to opt-out of these cookies. But opting out of some of these cookies may have an effect on your browsing experience.
Necessary Always Enabled
Necessary cookies are absolutely essential for the website to function properly. This category only includes cookies that ensures basic functionalities and security features of the website. These cookies do not store any personal information.
Non-necessary
Any cookies that may not be particularly necessary for the website to function and is used specifically to collect user personal data via analytics, ads, other embedded contents are termed as non-necessary cookies. It is mandatory to procure user consent prior to running these cookies on your website.
SAVE & ACCEPT
AllEscort